3D printing is something I’ve been keeping a careful eye over the past year or so. I find the technology and possibilities absolutely incredible, and in the very near future I truly believe that 3D printing will be common place in every office, business, and home.

Last year I ordered a sample kit from Shapeways which shows a few of the materials which can be printed. I have this sat on my desk, and every time I show it to someone they generally comment “What? All of this is 3D printed?” which always brings a smile to my face.

To create any 3D printed objects, you first need to create the 3D content. In my case I used 3D Studio Max, the same piece of software I use for creating visualisations and animations, but almost any piece of 3D software can create the data needed for printing.

I decided to print 2 coasters for this little test. I chose to create coasters as they would take relatively little time to create in 3D, and I wanted something nice to sit on my desk!

This screen-shot shows the coaster inside the 3D software. If the 3D model were to be used in an image, time would be spent refining the edges and giving them a nice chamfered finish, however with 3D printing we will naturally achieve rounded corners to an extent. If we wanted smoother larger chamfers on the 3D print, then we would need to add this detail in 3D, before printing.

When creating the 3D models it’s important the design looks nice, but also there are quite a few design rules to consider and understand, before sending the model to be printed. Shapeways has some great tutorials and explanations on how to create 3D models for printing, but in a nutshell, the models has to be thick enough and strong enough to be printed. Designing the models so they meet Shapways’ design rules can be one of the longest parts of the process, but something that can’t be skipped by. In the case of the “ard Digital” coaster, the “d” was extented to meet the outer circle, and the two words overlapped to give strength to the designs.

The Peugeot Lion coaster took longer to create in 3D due to its complexity, and after a few revisions, mainly making parts slightly thicker, it was also ready.

Anyway, after submitting the 3D models, the arrived back a few days later…..

I must say that I haven’t been excited about new technology in such a long time, but this was definitely exciting! Maybe it’s because I can see the potential for 3D printing, or perhaps it was because I usually create images, animations and other digital content, which is never a physical thing, unless you count prints, so to be able to hold and play with something I have created is incredible. 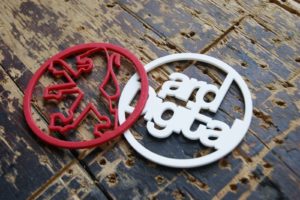 This is a close up shot of both coaster. Perhaps the difference in finish isn’t too clear, other than the colour, but when you’re holding them the polished coaster is noticeably smoother and more refined, and the white coaster is rougher, with a texture similar to that of a strong mint.

So that’s my first taste of 3D printing, now my head is whirling with ideas and possibilities, and I’m probably not going to sleep for a week! Overall I’m incredibly impressed with the process, and the end results. They have surpassed my expectations, and I really can’t put them down! All I can really say is that this won’t be the last you’ll hear from me on the subject of 3D printing!