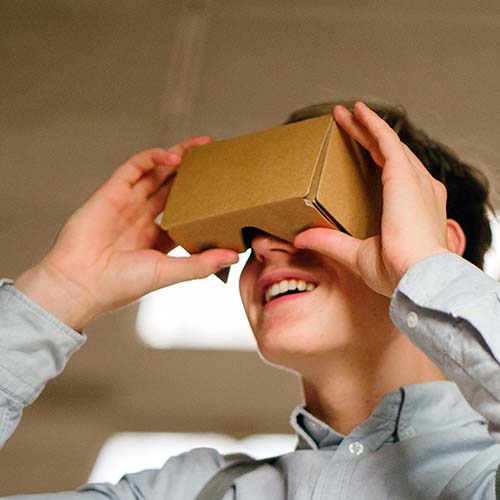 5 Reasons why I love the Google Cardboard

The Google Cardboard, an entry level VR headset, has been around for a few years now. There's even a Cardboard 2 now too. Slot in your Android smartphone and away you go! But while many will see this as an undesirable piece of landfill junk, I disagree!

Here are my top 5 reasons why I love the Google Cardboard....

That’s right, you don’t need the latest Samsung S9 or Google Pixel 3 to have VR fun. For years most Android smart phones have had the hardware required for VR. OK some modern games and apps won’t work on old phones, but that’s not a fault with VR.

For a whopping sum of £6 you can buy a Google Cardboard 2. I’ve bought more expensive coffees before! That makes it almost an impulse buy, especially when compared to the £100s to buy a Oculus Rift, or HTC Vive! But the price point isn’t just great for consumers, it’s also great for marketing and PR. When launching a product, service or brand, the Google Cardboard offers a very cheap and easy solution to engage with an audience through VR.

It’s cardboard, so there’s really not excuse not to customise it! Stick some branding onto the headset, make it your own, and you have something that will stick in folks minds. Again great for marketing and PR.

Single use and none recyclable plastics are hot topics for discussion right now, and rightly so. The Google Cardboard is obviously very recyclable, which means even the most eco conscious of folk will have a hard time turning one down!

And lastly, the Google Cardboard is small. OK you’d struggle to fit it into your trendy skinny jeans, but you certainly wouldn’t notice it in your bag. And that’s one of the things I love about mobile VR. It doesn’t rely on a massive headset, sensors, and a beast of a PC. Personally I’ve taken the Google Cardboard to meetings and networking events and also to friends and family houses too.

Making tech accessible to the masses is ultimately what makes something mainstream. The Oculus Rift, Vive and others, are great, but they’re not something that’s mainstream yet. They’re expensive, require powerful PCs, and will likely be outdated in a year or two too. Unless your serious about gaming, then you probably don’t own one.

The Google Cardboard isn’t the greatest VR kit out there. It lacks the visual quality of the high end headsets, it’s uncomfortable to wear, and it’s usability isn’t fantastic. However what it does  brilliantly is it makes VR accessible to almost anyone. We’ve all seen the YouTube clips of Grandma falling off the sofa whilst being chased by a VR dinosaur. And although these experiences are small, and even funny, they are helping to make VR mainstream and socially acceptable.

Google Cardboard also fits perfectly into the Punch Digital philosophy by keeping things as simple as possible. By using the hardware already in our pockets is a massive plus, and the ease of use once you've slipped your phone the Cardboard is pretty neat too.

I still think VR has a long way to go before it’s in everyone’s house, but by taking small steps, with tech such as the Google Cardboard, and even the Gear VR or Daydream, I believe VR has a strong future.