3D printed miniatures come in all scales. Over the past few months we have been 3D scanning and printing 3D model railway folks in what's know as 16mm (16mm = 1 foot), but the print size can be almost anything.

Over the past 2 days we've printed miniatured from 2cm to 20cm high, all to suit different model scales. The 3D scan can be scaled to to any size, which is one of the advantages of working with digital files! 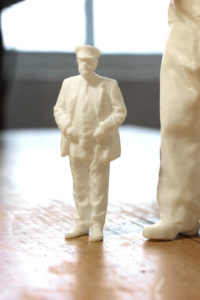 From tiny to large, we print in a range of sizes!

The largest "miniature" here is the driver, standing at 20cm high! The smallest is only 2cm tall. The size difference is large, but the process of 3D scanning and 3D printing is largely the same. 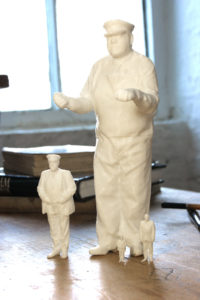 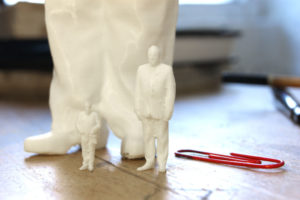 Printing at smaller scales can be very tricky, the printer only has a certain resolution, and also the strength of the prints is decreased as we reduce in size. You would struggle to break the largest model even by jumping on it, however a child could snap the smallest print quite easily! A miniature at 2cm high is really the smallest we could print at.

If you're interested in having your very own miniature model, please get in touch!!

Well it's that time of year again....

....so first of all, Happy Christmas everyone!

We're almost at the end of 2015, and I find it's always great to look back at what we've done over the past year. We can smile and pat ourselves on the back at the great work we've produced, but also to reflect on the hurdles and obstacles from the year!

I hope this year has been a great one for you, I know we've had a good year, producing some great work for you guys! As usual we've focused on creating architecture, interior, and product CGIs, but we also explored other area such as 3D printing and virtual reality. I find it's always great to explore and play, even if it's just to glimpse at what might be!

So I'll leave you with a short selection of our interesting 2015 projects for you to browse with a mince pie and sherry....

The student mattress room set was a continuation from 2014, but is still worth of a mention. We really enjoyed working on this project, partly down to the fact we were given a lot of creative freedom with regards to the set design, and also to how well the final image turned out. It was technically challenging matching the CGI with the real mattress, but the end result was worth the extra effort!

2015 saw an increase is architectural visualisations for us, and the New Broadway project was perhaps one of the more interesting projects to work on. The images were photo-composites, set at dusk, which meant we could play with light and colour much more than a typical day-time CGI.

The Construct & Configure app finally went live this year, and although it's not 100% finished, it shows the potential of what we can do, and the direction we see things going in the next few years! We will be finishing and improving the app, and it will be used by clients to interactively visualise their products. Give it a go if you haven't already!

As part of our need to explore and play with new tech, we have been busy with the 3D printer and scanner, turning folks into miniature figures! We honestly didn't know what would happen when we bought the printer, and it still feels very novel, however the miniature model railway guys have been taking advantage and we've been producing miniatures to go along with their trains, platforms and scenery!

There's been so much more happening in 2015 which I haven't mentioned, from virtual reality, to kitchen CGIs, along with all the other little things which crop up, and perhaps get lost along the way!

In 2016 we of course want to continue to produce amazing CGIs, animations and interactive projects, and as usual we will continue to play and explore! On our "wish list" is a VR headset, perhaps an Oculus Rift, or HTC Vive, which will allow us to really see what the future may hold! Also we will most likely launch another website, dedicated to the 3D scanning and printing, as the interest in this niche is definitly something we want to expand.

Also, away from the "doing", we want to attend more events, exhibitions, and such to make sure we're surrounded by new and exciting things. We'll be travelling all over the UK to various cities and events, so if you want to meet-up for a brew, chances are we could be passing by some time soon!

A couple of weeks ago I attended WutheringBytes over at Hebden Bridge to demo, show and explain 3D scanning and 3D printing.

WutheringBytes was set-up by Calderdale Council, to allow the public, companies, and anyone else to learn, engage and be a part of various technologies from numerous individuals and organisations. The wealth of technologies within our local area is fantastic, and I hope this event help to open people's eyes to just what's out there.

For my part in the event, I ran a 3D scanning and 3D printing demo. Through out the day I scanned anyone who wanted a go at turning themselves into digital versions. 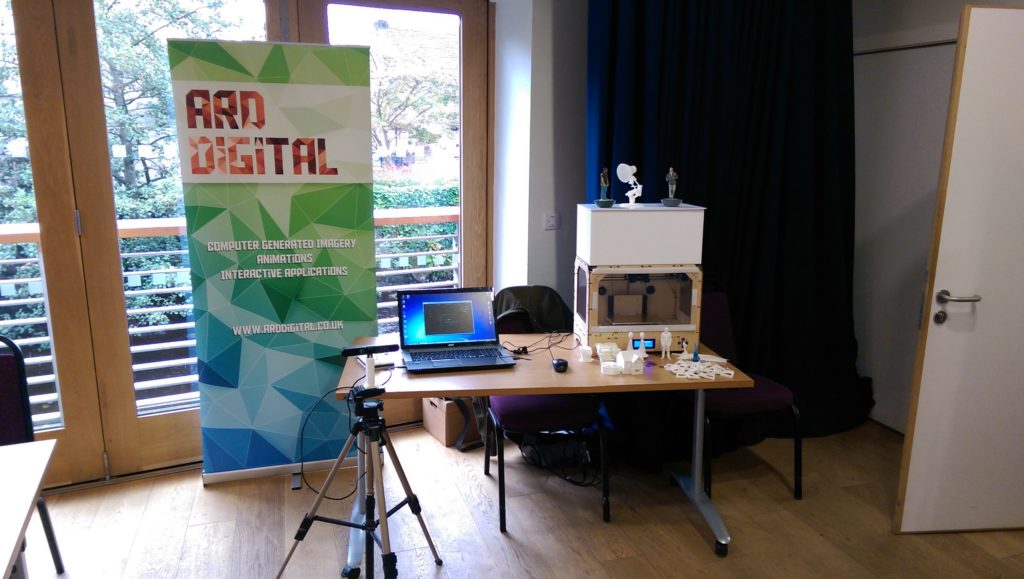 The response to the 3D scanning was fantastic, people couldn't wait to be scanned, and see themselves in digital 3D form! The scanning takes a few minutes, and as such the person being scanned has to stop completely still, which is harder than you'd think! The best response to the scanning was from the crowds of primary school children, who all wanted a go! 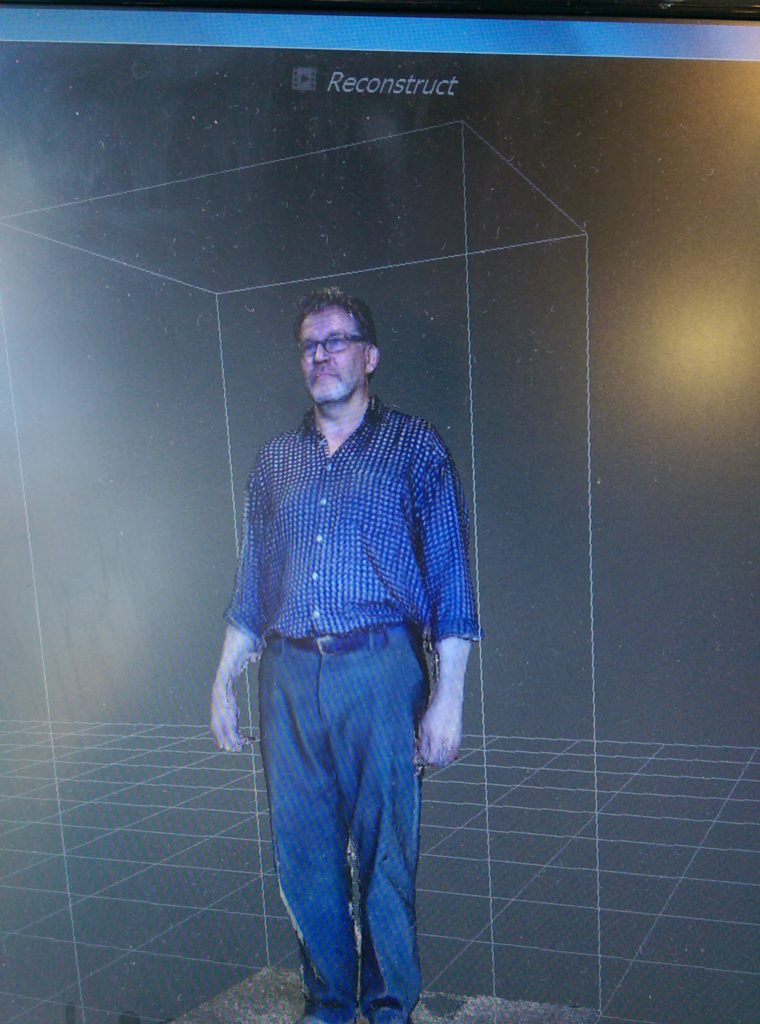 I will be sending the 3D scans to each person once I've had chance to sort and tidy the 3D files, and if they agree, I'll upload the scans so anyone can print or play with the 3D files.

I also gave away 3D printed bottle openers, some freshly printed that day. A penny coin slips into the bottle opener to give a hard edge to stop the plastic from breaking.  This is actually the last one I have from around 100 being printed! There's also the same bottle opener, but has ard Digital logo incorporated. I must print a few more! 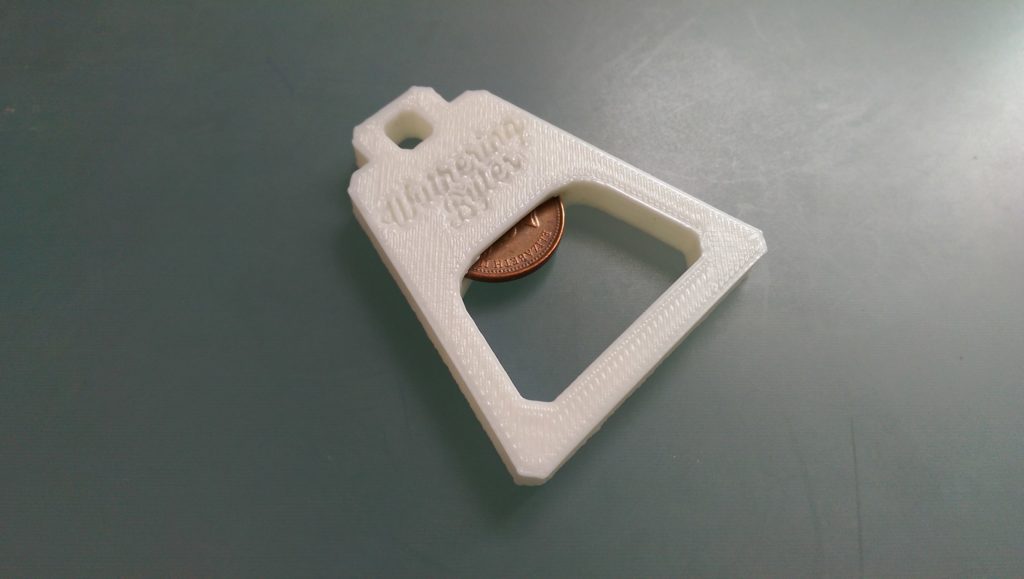 So that's what I got up to at WutheringBytes, be sure to keep an eye out for next years do, I'm sure it'll be a good one!