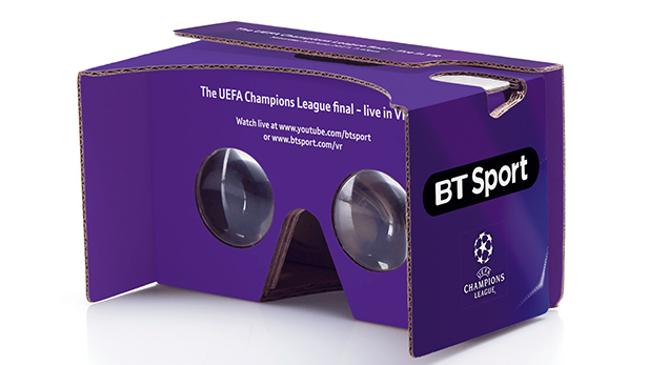 The UEFA Champions League final is this Saturday! The high light of the football season for many, and it never disappoints! But this year will be slightly different, as you'll apparently be able to watch the match in 360° VR!

BT Sport are going to stream the match, via YouTube, in 360° VR. This will allow anyone with a smart phone and a VR headset to watch the match.

Brilliant right? Well yes, but I have some reservations. Firstly, lets look at some of BT Sport's 360° VR videos on their YouTube channel. If you're unfamiliar with 360° VR videos, you can watch them on a standard PC, tablet or phone, and click and drag to look around. If you already have a VR viewer for your phone, play the video, click the Google Cardboard icon, and insert your phone into the viewer.

I have picked 2 clips, highlights of Manchester City vs Monaco, and a boxing match between Ryan Walsh and Marco McCullough.

The football clip shows the match from a single point on the edge of the pitch, and it does give you the feeling of being there. You can look behind and see the fans, but in truth you can see very little of the football.

The boxing match clip is much better. You actually feel like you are standing on the edge of the ring, and because the boxing ring is physically smaller than a football pitch, you can see much more of the action. However it still isn't perfect and would you honestly watch the whole fight like this? The novelty of watching the match in 360 is perhaps in the ability to look behind the scenes. That's what I find fascinating anyway.

But I can't help but feel we're taking 1 step forwards and 2 steps backwards. Let me explain, I love watching sport both live and on TV. With a live match you get the buzz, atmosphere and thrill from being there. When I watch sports on TV I have my home comforts, instant replays and commentary. From what I've seen from BT Sport so far is that 360° VR sport doesn't really match up against either of these.

Other sports channels are of course investing in 360° VR. This clip below of a German football match is actually much better, take a look for yourself.

The video is edited from several shots, from with the teams arriving to the final whistle and an empty stadium. The match itself is shown from various camera around the pitch, and from a drone flying over the players. The drone footage of the match is in my opinion the weakest part of the experience. It's simply hard to track the action. The drone twists and turns in order to follow the match, and this will lead to motion sickness for many too. The footage from the pitch side and stands are great though. You do get a real feeling of being there. I love the shot where the players emerge from the tunnel and walk past you. Unless you're lucky enough to be a match official or a mascot, you'll never be closer to the action than this, and this is where 360° VR should be utilised.

Story telling and directing 360° VR does appear to be a huge unknown right now, and these big budget TV stations obviously aren't sure how best to use the technology they've been given. For it to be a success, I believe we need to change how we watch sport and entertainment in 360° VR, and differentiate the experience from a live event or the TV. The 360° VR experience needs to be interactive, to the point where the viewer can direct what they're seeing. They need to be able to switch view points, perhaps to a camera on the goal line, or to one between two arguing managers! Yes a director could do all these things for the viewer, but when you're so immersed in the 360° VR experience, having someone else control what you're seeing can become very disorientating and frankly annoying.

Another idea would be to have the option to switch between 360° VR and traditional TV feed. Watching Netflix on a VR headset basically replicates a cinema. The screen is in front of you, and the 360° VR adds the seating, building, lighting, etc. The screen doesn't move, but you can look around at the environment. For sports, and other events, it would be amazing to experience parts of it in 360° VR, but also have the choice to watch those instant replays, slow mo shots, and other amazing things we take for granted with TV. A simple click of a button could make a TV screen appear, overlaid onto the 360° VR feed, and simply made to disappear at another click.

Sadly however, I worry that TV stations are rushing to use 360° VR before it's fully ready. YouTube for instance simply has no ability to switch cameras. I'm sure there are some clever folk who could (and probably are) inventing ways to do this, but right now it's simply not there. I know many people will see 360° VR as "hype" and a gimmick, and these early attempts at 360° VR will only enforce their negative thoughts of the technology. It really is painful to see such big corporations, with huge audiences, make such little progress with 360° VR. BT Sport may have built up some hype for showing the final in 360° VR, but will this turn a lot of TV viewers into VR viewers? I personally doubt it, and in fact I think it could do more harm that good if we get a 360° VR experience that matches their existing content.

But time will tell, and tomorrow evening I will be wearing my headset. I'm fascinated to see how it works, and I have my fingers crossed that BT Sport will put on an incredible experience, however I'm not holding my breath!

I will report back next week to give an update after my first 360° VR match.