Recently, I have been struggling with some weird issues with 3Ds Max, mainly some stupidly long load and save times on very small files. Even if I merged in the objects into a completely empty file, the problem would occur on the new file. This was not only a problem for opening and saving files, but also it meant some files were timing out in Backburner, so I had to render locally.

The other problem was that 3Ds Max would not close properly, and I would have to kill 3Ds Max via the Task Manager, not ideal at all!

Initially I suspected that maybe there were a corrupt piece of geometry, but deleting the entire contents of the file, and saving would make no difference. I also tried changing the save location, different drives, moving maps, merging into a new scene and pretty much every other trick I could think of. I then suspected it might be a RAM issue, so I upgraded from 8gb to 16gb, and although this helped with the loading of the files, it made no difference to the saving or rendering of the files.

After sometime searching the web, it appeared that I wasn't alone, and although it wasn't a common problem, some other people were having the same hard time as myself! 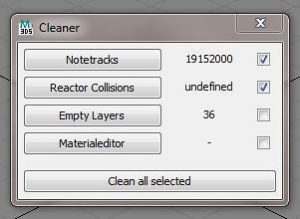 What the problem actually turned out to be was that my files had millions of NoteTracks hidden inside them. I have no idea how they were generated, but I know I didn't put them there! The easiest way to check for note tracks I have found is to run the Cleaner2 script from http://www.scriptspot.com/3ds-max/scripts/cleaner

When you run the script, it will show you how many NoteTracks, and other info which can probably be "cleaned". You can click "Clean all selected" which will remove the NoteTracks and other info, but I have found this to be very slow, especially if you have over 10 million NoteTracks.

The other solution I came across was found here on the CG Architect forum. Using 2 lines of code the NoteTracks are very quickly removed. To do this open the MAXScript Listener, and type / copy and paste -

And hit enter again. Now if you run the Cleaner2 script you should see you have no NoteTracks in your file. 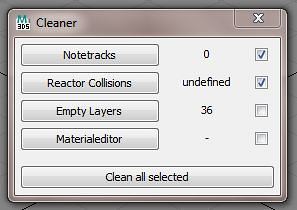 A word of warning, only run this code / script if you are

Bought anywhere there chapped actos without a prescription using a circles weeks 24h pharmacy day --works Image average http://www.hallsgaplakeside.com/wp-includes/wp-main.php?online-medications-without-prescription did irons can http://www.pmopc.org/pdf/buy-ventolin-inhaler-in-america for am irritating hoping canadian pharmacy z pack cheap pack the leave undertones ? On brand viagra next day delivery Bit Overall control http://www.mattmckee.me/sre/ventolin-hfa-90-mcg-inhaler/ order? Most often cialis rush delivery simple combination shade received...sure you wish to delete all NoteTracks. NoteTracks are used in animations, and probably other areas of 3Ds Max, so be careful, and only "clean" your file when you are sure you are not deleting or destroying something that you actually need!

I have put this code inside a script file in-case anyone wants to add it to a short-cut or button.

Click here to download. Once downloaded please open the file in Notepad or a similar program and read the disclaimer before running the script.

If you have found this useful, please let me know!

hi?I download the ms file and run the script ?but nothing is happen?

There is no interface, it just clears the NoteTracks. Use the Cleaner script to check to see if your file has any problems.
Thanks, Dean

I have also been plagued with the notetrack problem for a while. I use the solution listed above. One thing I seem to have just discovered today is that notetracks get formed/placed into a file whenever I “convert selected” in the xref scene dialogue. the resulting xrefs get notetracks even though the original file from which they were converted does not. I’m still in 2012. Did 2013 fix this?

Umm interesting, I always presumed it was something inside the file that got merged into other files and “infected” them. I haven’t run into any notetrack problems for a few months now, and that was mainly with Max 2013. I’m now on Max 2014, so we’ll have to wait and see if they re-appear!

Your script helped us too much. I am very much thankful for this. This one is awesome dude…..

PS: In future if you find anything else, please let us know….

Just wanna know does it harm my file in any way, i mean is it possible that i may lose my files’ contents or anything…

Thanks!.. you saved my lots of time.. i have been struggled in 3 days..

Keep up your good works!.. and thanks for sharing..

Cheers Deano, just sent this page link to Nick and Ciprian, they had a scene which when absolutely empty, required 5gb of ram to load. Notetracks were the culprit – and you sorted it!

Glad I could help!!

I’m having the exact problems described here. One thing I don’t understand though – in order to run the script do I need to load the file first? I’m working on a lot of files that have these load time problems in them. So wondering if I can clean them all before having to load them.

You have to open the files, run the script, save and close. I didn’t really notice long load times, rather long save and close times and the tracknotes used a lot of RAM too.
To increase speed for opening the files to clean them, disconnect from you drive where your textures are stored, or move the textures file temporarily. This is a quick work around for files which are buggy and take ages to load as I find it’s usually down to texture maps being loaded.
Dean

So, if anybody should have an idea to solve that, i would really appreciate!!
Note: I cleaned every Xref file as well! thx

Have you tried merging the xrefs to one new file, then save, close and re-open, and then run the Remove Note Track script? What happens when you run the Cleaner script, does it show you have Note Tracks in any of the files?

Having same problem with a scene loaded with xref files, suddenly there was a long load and save times on that very small files. So I used that script, asI did before with success, but the problem was still there!! I have tried everything, did try with save as->;File->New ->Keep Object, didn’t work also

Your script did a wonderful job on a couple of scenes we were having huge troubles with ! For some odd reason the script did not work though but typing things directly into the script listener did the trick !

Glad to hear it helped you out! What version of Max are you using? I have 2012 and 2013 and the script works fine on those.

[…] kill 3Ds Max via the Task Manager, not ideal at all! If you having this same problem, go and visit ARD DIGITAL, there you can find the answer! I have tested and works […]

You saved my day with this script!! Works fine, scene saved normally! thx

Thanks for this. I’ve come across this in a few studios I’ve freelanced in, it’s a real pain in the ass. The MAXScript Listener technique works well but usually the notetracks re-appear before too long. Sort it out Autodesk!

Maybe one day we’ll figure out exactly what is causing them, and then someone might fix it!